Here are your choices for the final Assessment for our animal unit. One is similar to the microbiology unit final assessment. It is a summary of the information given on the animals. The other choice is more of a continuing of your learning by looking at an animal of your choice in greater detail. They are of equal value. Choose which ever one you want. The deadline is Tuesday, November 10.

Here are the notes I gave you since I came back from being ill. They start with the Great Oxygenation Event. Because of adjustments to new technology, some parts of the notes disappeared into the ether. If that is a problem, check my notes from the previous year. Most are the same. Any differences will not make a difference when using them for class.

Now that you have gone through the animal kingdom, I want to give you some information about evolution. The first handout is on how the environment is a major influence on evolution. I compare the sister clades crustacea and insecta. Looking at their body systems, you will notice that the change from a lobster-like animal to an insect is all due to a complete change in environment.

Life on Land vs Life in Water

The second handout, a pdf from notes I gave to a class last year, is on convergent evolution. This is the subtext on the Life on Land vs Life in Water notes. If the environment is so important, animals from different groups should begin to look similar if they have similar niches (occupations) in an environment. And they can look at the three links below. The first link shows Ocean Ramsey, a shark conservationist, free-diving with a Great White Shark. First of all, she does not recommend people try this unless, like her, they have spent years studying shark behaviour. Secondly, notice how the shark swims.

Now watch the video at the link below. It is a GoPro video of dolphins swimming. Notice how similar the body of a dolphin is to that of a shark. Dolphins are grouped as toothed whales, so evolved from Pakicetus. Sharks evolved from ancestors that never walked on land. So, notice the differences in how they move compared to the shark.

Now watch this last video. It is a slow-motion video of dogs running on a beach. Notice how the back moves and how the tail goes up and down as the dog pulls its back legs under and the tail goes up when it stretches its spine again. Compare that to the way the dolphin swims, despite not having any back legs.

The dolphin and shark look similar because of the environment. However, the dolphin has an evolutionary history of living on land and is stuck with a body that initially evolved for that. So with that toolkit in its belt, it adjusted it to live in the water. It lost its legs, but it kept the musculature and therefore has a movement more like a dog in a shark-like body. That similar fusiform (rocket-shaped) body is required for fast swimmers in water. It even evolved a cartilaginous dorsal fin for stability, and its front fins are mostly immobile, but have the same bone structure as most mammals. That’s convergent evolution again.

Here’s a dolphin showing atavism, a recurrence of a trait or traits from an ancestral organism. Most dolphins no longer have their hind limbs. However they still have the genes for them and occasionally this happens and hind limbs grow again.

And here is a picture of a dolphin skeleton at the Bamfield Marine Science Centre. I took this photo on a field trip. This shows how the fins are homologous to our hands with the one bone – two bone – many little bones – five digits body plan first observed in the Tiktaalik fossil. I guess it might be ironic that the “hand” structure that we see in a dolphin to demonstrate how it once was descended from a land mammal also shows it is descended from a 375 million year old fish. Note that this skeleton was from a washed-up dead specimen and prepared by students. Some of the “fingers” are missing and incomplete. 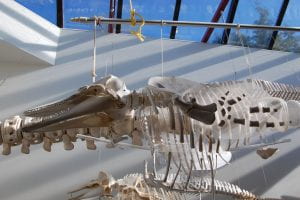 Sorry all. I am very busy trying to finish the Yearbook and have neglected my classes. However, you guys are amazing! Mike and Ryley did incredible sourdoughs and Aiden just sent me the following pictures of the potato plants he is growing. I grew up on Prince Edward Island so know a good potato plant when I see one, and this is one to be proud of. Check out the most famous Canadian song featuring potatoes! 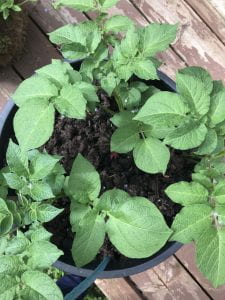 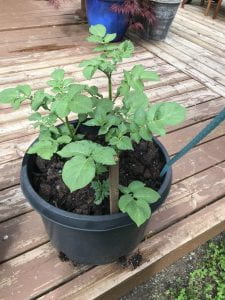 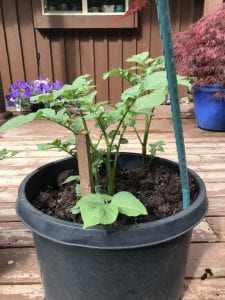 Please note: There is no 7 notes.

Sorry for my absence. Working on the Yearbook is eating up my time. Mike Aguilar sent me a time lapse video of his sourdough starter and I thought I would share it, particularly since I killed two so far. My first one died for some unknown reason and my second one went moldy due to an over-tightened cover.

And if you want to learn more about sourdough, CBC did an interview with a sourdough researcher.

I will no longer provide notes on the different animal phyla. It is taking too much time to convert them into note form. I may provide my last semester notes, with all their typos and mistakes, but will  concentrate instead on the ideas that connect all this together.

This post helps to explain why life on Earth was microscopic for 3 billion years and how it was able to overcome the physical constraint that imposed the size limit on life. Read these notes first:

I saved you the trouble of doing the math, however, try to understand what the math means. As much as students, typically, do not like math, it is the language of patterns and understanding some math allows us to understand why some phenomenon occurs as it does, and allows us to extend the pattern and make predictions. In this case, it explains why sponges are the way they are and could not change in the last 600 million plus years and why the evolution of organ systems allows the largest animal ever to exist on Earth, the blue whale, to exist. Which leads us to the following:

With these two notes as background, you will have a better understanding of why the animal phyla showcased in the Shape of Life series progress as they do. I recommend you watch, or re-watch, the rest of the series with these notes in mind. The order should be, after the sponges,

Here are the latest and last worksheets for the statistics part of the Statistics and Probability Unit. The next worksheets will be on probability. As always, the worksheets are numbered, so I encourage you to do them in numerical order. However, with weighted mean and trimmed mean, the order you do them in is not important.

Weighted means are used in determining marks, with parts of the course worth different percentages of the final grade. Trimmed means are used in all manner of places, including Olympic scoring of gymnastics, figure skating and diving, the judged events. They drop the highest and lowest marks given by the judges to try to prevent bias from playing a part in the scoring.

If you have questions, email me and I will help.

Hello Workplace 10 Mathematicians. I have my edublog up and running, as you can see. For this post I am linking all the worksheets so far. Remember, do them in order. Most mathematics is linear, that is, the skills build upon previous skills. That’s why, if you missed something in a previous grade in math, you may find later concepts difficult to understand. Don’t jump ahead in math until you are ready.

For the mode, median, mean worksheet, I recommended to some students to skip the first problem if they didn’t master the skill of calculating weekly earnings. I modified that worksheet by showing steps  to guide you through solving practice #2. Use the same steps for practice #3 and the test question. When you complete the test question, take a picture of it and email it to me. If it is correct, I will mark it done and send you the next worksheet. If it isn’t, I will show you where your mistake(s) occurred and probably ask you to redo it. Or, I may send you another set of practice problems with another test question.

Remember, don’t jump ahead until you know you are doing the work correctly.

Here are the worksheets, most recent at the top, like these posts.

2b Guided solution for #2

There will be a new worksheet soon.

It’s been a busy time, but I am back! I have a new lesson. Rather than post/send the blank lesson and the class notes, which were huge files, I have typed out the notes and am sending them. It will simplify the process, I believe, although it is one of the reasons for the lack of speed in our progress. Typing is a lot slower than posting something I already wrote. However, the end product is better.

We watched a David Attenborough documentary before March Break called First Life about the Ediacara Period. The notes summarize the video. If you missed it or would like to review it, it is on YouTube at:

If you are living with any other science geeks, invite them to watch. And as you may remember, Mistaken Point, Nfld. features prominently in it.

Here are the notes for the ediacaran animals:

And for those who are missing the microbiology organisms, here is how you can enjoy them again and participate in one of the latest COVID-19 rages, sourdough bread. Courtesy of Sam Wong of New Scientist, here is how you can grow your own starter and make sourdough bread. My own starter, that I call Sam, is in the 3rd day of the process to make some bread.

If you want a bit more about sourdough bread, check out my Science for Citizens 11 post on the same subject.